The Gathering-2014 International Society of Glass Beadmakers Conference in Houston

Houston? In July? Those were my thoughts when I heard the Gathering was going to be in Houston this year. The Gathering is an annual event hosted by the ISGB, The International Society of Glass Beadmakers. Glass artists and enthusiasts travel from around the world to meet and socialize with other beadmakers, shop, and to learn new techniques. The Gathering this year was held at the Hyatt Regency Hotel, a huge hotel with an atrium in downtown Houston. The hotel was very nice and so was downtown Houston. 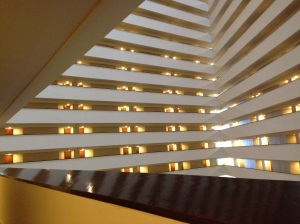 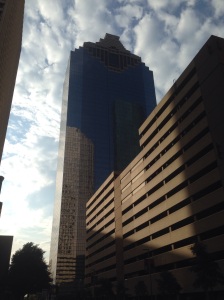 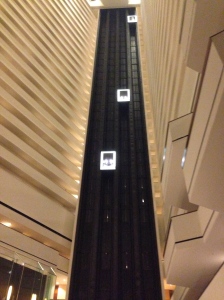 Underneath downtown Houston is the Downtown Tunnel System, “…an interconnected series of restaurants, shops, etc. servicing all those who wish to avoid the characteristic Houston weather, while walking around in air conditioned comfort over the course of several miles.”

I signed up for a two day workshop before the conference on making sundial cabachons. The workshop was given by Amanda Muddimer of Mangobeads. 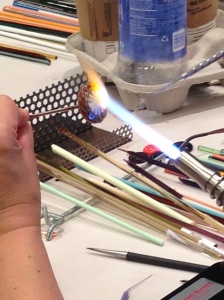 Here are the cabachons we made: 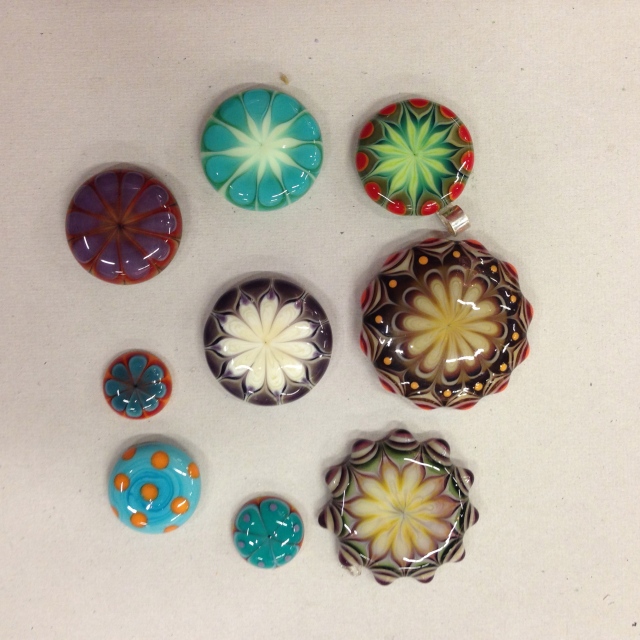 I also took a class from Karen Leonardo on making simple sculpted wild flowers. We used the cool tools that Karen makes. 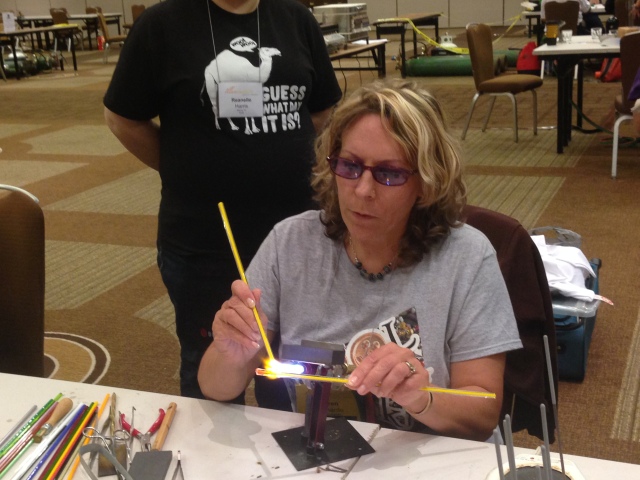 The opening of the Vendors Area was on Thursday with glass, tools, torches, findings and the Bead Of Courage Stand.   I spent way too much on glass and tools.

I was fortunate to find a very compatible roommate for the conference, Susan Lambert. On Thursday Susan and I took the afternoon off from the conference and went to a wonderful museum, the Museum of Fine Arts Houston. We had fun with Jesús Rafael Soto’s Houston Penetrable: 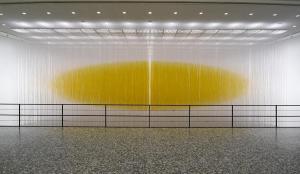 We enjoyed the large and diverse art collection. 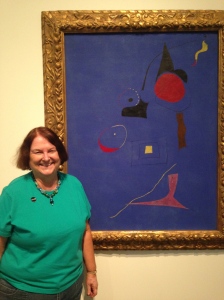 On Friday we attended presentations by many notable glass artists including Monique Swinkels, Stephanie Sersich, Jari Sheese, and Sage Holland. 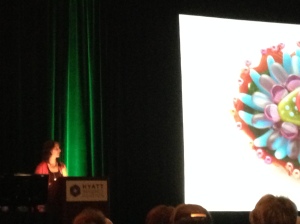 In the evening we walked around downtown and had dinner at Artista. They had a jazz band downstairs. 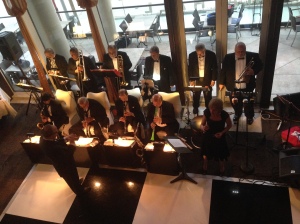 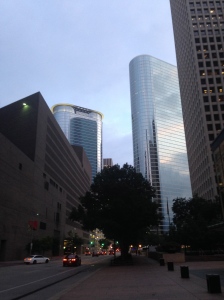 On Friday was the Bead Bazaar. Several members of my local ISGB group, the Silicon Valley Fireflies, had booths. 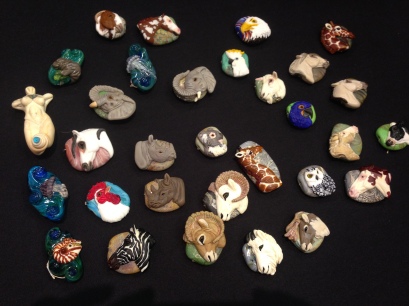 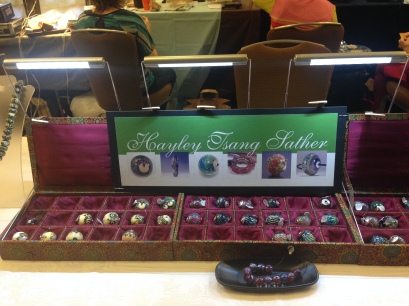 My roommate, Susan Lambert, also had a booth: 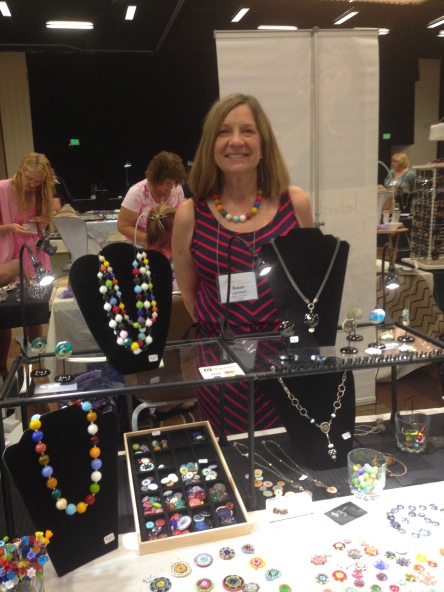 While volunteering at the Bead Bazaar I learned of an art gallery specializing in pottery, 18 Hands Gallery. This gallery was in the Heights section of Houston and I headed there in the afternoon.

This is what I bought:

I enjoyed exploring the Heights, a wonderfully funky area with galleries, antique stores, and restaurants. 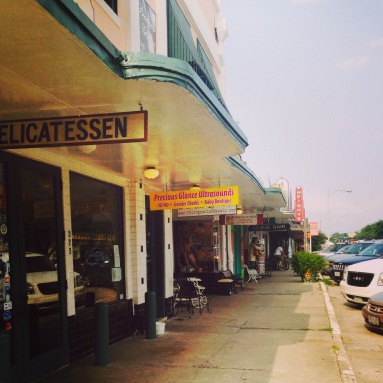 In the evening we had the bead swap. It was wonderful fun and I got a lot of great beads.

I liked the Gathering so much that I plan to go next year to Albuquerque. Thank you ISGB.

I make lampwork beads and jewelry. My other interests include traveling, reading, hiking, and collecting art and handcrafted items, especially pottery. I have always loved handmade things and have collected hand-thrown pottery since I was a teenager. I have done stained glass and weaving. I had been stringing beads into necklaces for a while when I attended a clay and glass show in Palo Alto. There was a beadmaker there whose work I fell in love with. I bought one bead to make into a necklace and decided I wanted to learn how to make glass beads. I took my first beadmaking class from Jackie Marr in Santa Cruz. After taking another class from Katie Stuart in Santa Barbara I set up my own studio and have not looked back. Beadmaking is like meditation for me. What has kept me interested is that there is always some new technique or color combination to learn or try. I have taken advanced classes from Sally Prasch, Marjorie Langston, Holly Cooper, Shirley Cook, Dolly Ahles, J.C. Herrill, Kristen Franzten Orr, Amy Waldman Smith, Claudia Trimbur-Pagel, Astrid Riedel, Amanda Muddimer, Melanie Moertel, Angela Meier, Gay Massender, Kris Schaible, and Jennifer Geldard. I love combining my love of beadmaking and traveling by taking classes away from home. In September, 2016 I got to attend a bead symposium in Wertheim, Germany. I took a bead lining class and watched many demos. I am married and have one son, age 26. I live in the Santa Cruz Mountains between Los Gatos and Scotts Valley, California.
View all posts by ingetraud →
This entry was posted in beadmaking, beadmaking class, Gathering, handmade beads, Houston, lampwork beads, lampworking class and tagged art beads, beadmaking, beadmaking class, beads, Creating Glass Beads, Gathering, glass beads, handmade beads, Hayley Tsang, Houston, Jelveh Jafarian, Joy Munshower, lampwork, lampwork beads, Patty Lakinsmith, Susan Lambert. Bookmark the permalink.